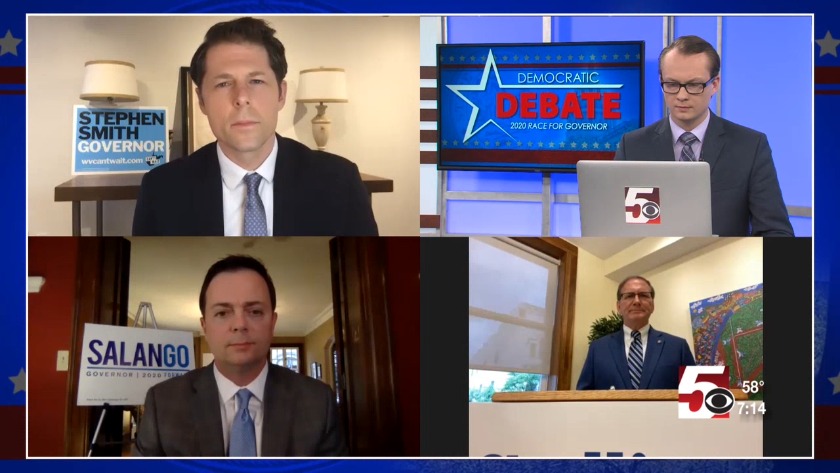 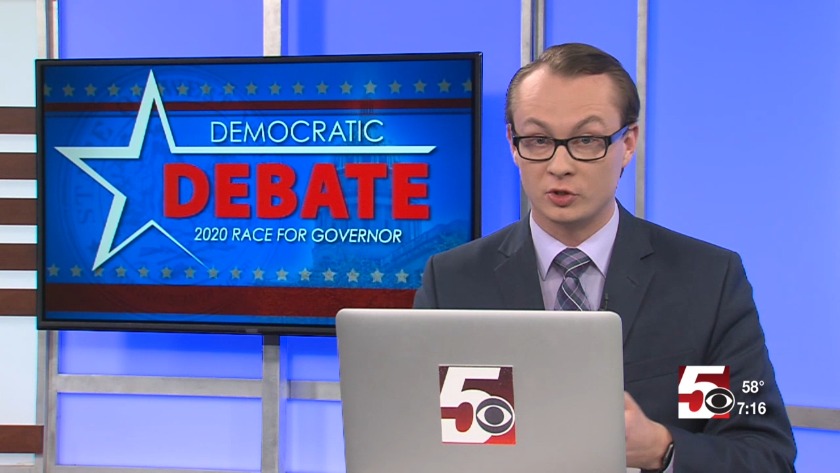 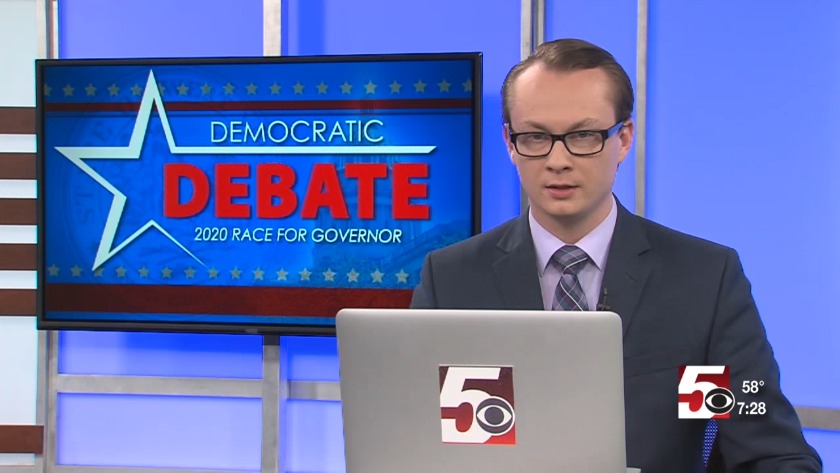 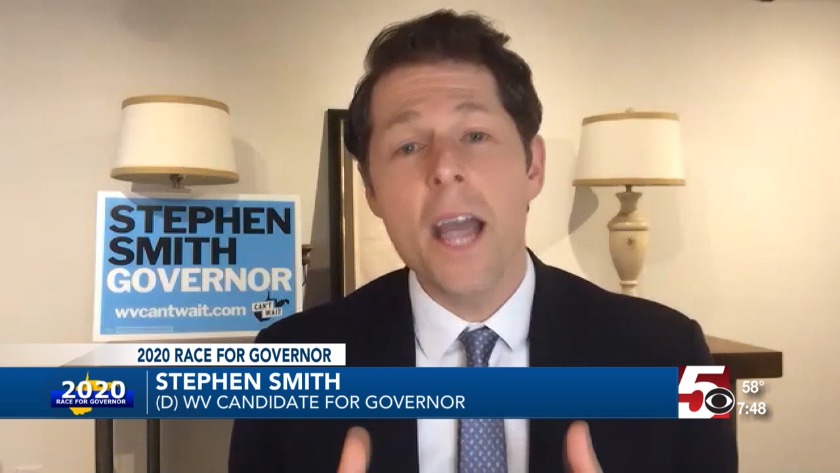 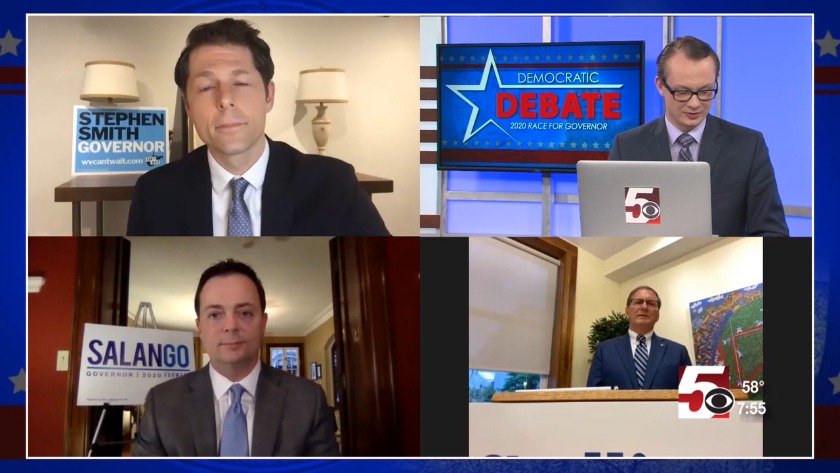 BRIDGEPORT, W.Va. (WDTV) -- The 2020 campaign season in West Virginia has largely turned to virtual platforms due to the COVID-19 pandemic.

That’s also how the final Democratic debate in the 2020 race for governor was conducted hosted by WDTV 5 News.

The candidates compared their platforms and showed voters how they stack up against each other on a variety of issues.

They included: Kanawha County Commissioner Ben Salango; Community organizer and child advocate Stephen Smith; and State Senator from Boone County Dr. Ron Stollings. Below is a summary of the topics discussed on the program.

ON THE ISSUES
The state’s response to the pandemic

Salango: “The time to plan for a serious issue like this isn’t three or four weeks after it starts.”

Smith: “We don’t think one governor or one leader is the answer. We think the people have the answers. The things we would’ve done different in response to this are to serve the working people of this state in a way this governor simply has not...This is what happens in a crisis in West Virginia. Those in charge try to convince us that we have to choose between our health and our bank accounts. We don’t.”

Stollings: “I think the governor stumbled out of the box a bit, but once he got Cathy Slemp and Clay Marsh on board, I think they’re doing a better job now.”

He added there are still holes in the response, including about inadequate testing, and PPE. He also criticized past public health cuts.

How would you handle a budget deficit on their first day in office and would you support any tax increases to replace lost revenue?

Smith: Says he wants to build new revenue sources for the government and doesn’t want that to come from small businesses and working people.

“We can have a government that is wealthy…as soon as we stop allowing ourselves to get robbed.”

Stollings: “We can’t cut government anymore. We do have a rainy day fund that can cushion the blow.”

He says he wants to invest in education, infrastructure, broadband, and attract manufacturing companies to grow economy.

Salango: Criticizes the governor for not spending $1.25 billion from federal government.

“We can’t sit on it like the failed RISE program and the road bond program…The only way to increase revenue is to increase taxes or revenue sources.”

He adds he’s not in favor of increasing taxes. Wants to focus increasing revenue streams by regions.

“It is absolutely wrong to sit on the money and try to use it to back-fill the budget if Congress hasn’t approved it.”

How would you prevent rural hospitals from closing?

Stollings: Highlighted the need for healthcare reform and problems with government-funded insurance programs. He says he wants to use Medicaid dollars better.

“In the next four to eight years, this healthcare reform issue is going to be big. You want someone in there that has a patient-centered approach to it and has experience in health policy. That would be me.”

Salango: Said there are fewer private-paying insurers and hospitals relying on more federal and state insurance programs. He wants to change the payment structure for rural hospitals to a global payment system and cited Pennsylvania’s model.

“The healthcare problem is much deeper than hospital closings. There is no one in West Virginia who is getting good care at a good price….We have a system that is accountable to health insurance companies and pharmaceutical companies instead of patients.”

How would you address substance abuse in the state?

Salango: “We must lead the nation in recovery.”

Smith: “We just don’t have an opioid crisis or a substance use disorder crisis. We have a crisis of pain and trauma caused by years, generations, of pain and trauma inflicted upon us by out-of-state corporations who are busy getting rich off our pain and our work.”

Stollings: Highlighted his experience passing legislation to address addiction and work with the state public health caucus. He added he wants investments in the "Birth-to-Three" program and said the payment structure for treatment and recovery is backwards.

How would you encourage new people to become foster parents?

Smith: “The foster care crisis, like all the rest, isn’t something that can be solved by one or two small tweaks.”

Stollings: Criticized the "draconian" cuts to DHHR in the past. He highlighted his support of increasing funding for foster care programs and grandfamilies.

He said he would create a government council on children and families to improve communication within agencies.

He believes DHHR is too big to function and would form a bureau of childhood advocacy. He also wants to place a nurse/social worker in every school.

How would you support public education?

Stollings: “We don’t need to privatize education in West Virginia. We need to enhance public education.”

He wants to focus on broadband expansion, wraparound services, and the “Birth to Three” program.

Salango: Said he is against charter schools. He also wants to give teachers the “freedom to teach” and give them proper compensation.

“We micromanage them at the Capitol. We need to let teachers teach.”

Smith: Said we need to follow the lead of teachers and not just give them the freedom to teach in their classrooms. He said we should follow their lead to fight for change.

He also highlighted his campaign’s broad support from educators.

“That’s why we can win it. Not because one guy has a good idea, but because we have people from all walks of life coming together and demanding it.

How would you increase access to broadband internet to all corners of the state?

Salango: “People have been talking about expanding broadband for 10 years now, but it still isn’t happening. We have to make it an actual priority.”

He wants to use money for infrastructure development and “quit talking about it and just get it done.”

Smith: “We don’t just have a broadband problem. We have a monopoly problem.”

He believes a fight against providers is the only way to increase broadband access; and would turn broadband into a public utility.

Stollings: Said we need to have a strategic plan to use federal funding. Highlights Doddridge County’s plan to get residents internet access.

He would have a broadband director in the governor’s office.

What is your plan to fix West Virginia roads?

He called the DOH corrupt and criticized cuts to state road jobs in the past.

“Privatization only works for the private companies getting rich off of it.”

Stollings: Mentioned high percentage of state-maintained roads and said the federal government has historically spend the most money on our roads. He agreed with Smith on privatization and stressed the importance of key maintenance and treating secondary roads.

Salango: Roads and infrastructure were the number one concerns he’s heard on the campaign trail. He said the state isn’t properly using road bond money and "waited to use it during an election year."

What would a coal miner’s family get from your administration and how would you diversify the energy economy?

“We didn’t do it well in Southern West Virginia and it’s come back to haunt us.”

He said he spearheaded a bill to give business or manufacturing company a 50% tax credit if they locate on post-mine land sites. That, he said, encourages initial development. He thinks rare earth elements are the future.

Salango: Talked about his family’s history as miners.

“There never will be a day when I turn my back on coal miners and those hard-working families or the gas workers.”

He said he’s in favor of creating other opportunities for them.

“We have to make sure we are in favor of all forms of energy without turning our backs on those industries, those families, those miners that created West Virginia.”

He also talked about employment opportunities Kanawha County made for former miners through the UKAN Program.

“What you’ll receive in our plan is a jobs guarantee. Not the promise of training for some job that doesn’t cover you or your family or doesn’t even exist in your county.”

How would you keep residents in the state and attract new ones?

Salango: Said he believes this is one of the state’s biggest problems. He said the tax burden has shifted to those who have stayed in the state and wants to increase vocational programs in schools.

Smith: Said we’re “failing our kids.” He highlighted his plan to keep wealth in the state instead of sending it out of state.

“We also have to make our state a welcoming place.”

He said the state needs to “unapologetically welcome people” regardless of their backgrounds.

Stollings: Thinks COVID-19 will allow the state to “hit the reset button.” He said the state needs to capitalize on tourism, recreation and the outdoors.

“West Virginia is where people want to come in the post-pandemic. We need to have the infrastructure in place and be ready for them and be welcoming. We should not be discriminating against anyone.”

Smith: “Let’s talk about how a Democrat wins in 2020 in West Virginia.”
1. Energize Democratic base.
2. Bring people back into the political process
3. Win over people who never would consider voting for a democrat.

He said TV ads aren’t the answer. Instead, the focus needs to be on town halls, conversations, invite people into the campaign with bold ideas.

Stollings: “If I’m attacked, I have to answer that attack. But it doesn’t mean I’m going to attack back.”

He highlighted the fact that he’s been elected 4 times to the Senate as a Democrat in Trump Country.

“I frankly think between the three of us talking here…I feel that I can get elected in the fall. I worry that the other two folks that are on here would have a problem in the fall.

“We’re a conservative state. People don’t like socialism, frankly. We have to have bigger ideas than transforming a golf course into soccer fields”

Salango: “I’m glad the senator brought up one of the projects I created.”
He said his campaign’s focus needs to be on the positives.

He also said he plans to announce further opportunities for the aforementioned Shawnee Sports Complex soon.

Opening and closing statements
Salango: "After this pandemic subsides, we need a leader who is going to rebuild our economy.”

He mentioned several of his endorsements and said he has a history of getting things done as a small business owner and county commissioner.

Smith: “The fundamental difference in our campaign is I don’t think I’m the answer to all of our problems.”

He said his campaign does not take "corporate cash" and has recruited several down-ballot candidates and volunteers.

He also gave out his cell phone number multiple times during the debate.

Stolling: “I feel like I’m uniquely qualified to lead our state during this challenging time."

He talked about his experience as a physician and time in the state Senate:

He also touched on his work in the legislature creating bipartisan support for various bills.