UPDATE: W.Va Fire Marshals charge man with first degree arson after he allegedly set his soon to be ex-wife's house on fire 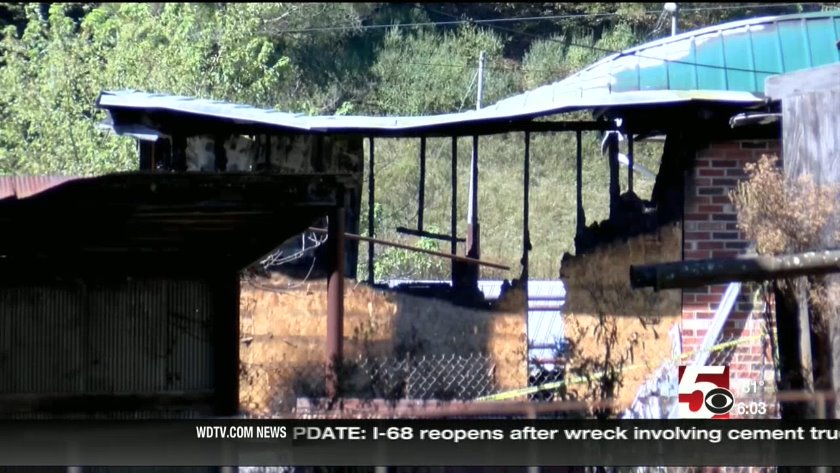 According to the criminal complaint, a fire occurred at 805 Spruce Fork Road around 5:33 p.m. The fire was investigated by the West Virginia State Fire Marshal's Office.

The Fire Marshal's Office decided that the fire was arson.

The owner of the house received a call from her soon to be ex-husband, Daniel Grogg, according to the compliant. Grogg told her that her house was on fire.

Deputies talked to Grogg on scene where he admitted that he entered the home by climbing onto the back porch, pushing the air conditioning unit from the window of an additional bedroom and climbing into the home.

Grogg said that he had not been at the home for several hours and was dropped of at the end of the road by a friend, according to the complaint.

Grogg explained that he asked a woman driving a van for a ride because he believed it was "his house on fire," according to the Fire Marshal's Office.

The lady and other witnesses gave statements that it was impossible to see if the house was actually on fire.

The owner of the home said that Grogg had never actually lived at the home, according to the complaint. She said that he was upset because his name was never put on the deed.

According to the complaint, Grogg cashed in $32,000 of his settlement to purchase the home. Grogg was aware that he was losing the home and 2-year-old daughter in the divorce because he wouldn't show up for mediation.

The home owner said that the argument became so heated that the judge had to continue the hearing, according to the complaint.

The home owner's father gave a statement that Grogg had sexually molested his two younger daughters and charges were pending, according to the complaint.

Deputies told the Fire Marshal's Office that Grogg was well aware of the accusations. They were obtaining felony warrants once they finalized their investigation.

Friends of Grogg said that they were at the home just before the fire, according to the Fire Marshal's Office. They said Grogg was behind the home for a few minutes before they left.

The Fire Marshal's Office says that the fire started under the back addition of the home, where Grogg was just before they left.

The Fire marshal's office released video footage of the fire on Sept. 12.

Video footage shows smoke coming up over the roof within 12 seconds of Grogg is seen hurriedly coming from behind the house.

Grogg's friends said that they didn't actually see the damage to his car until that day, according to the Fire Marshal's Office. They said Grogg was extremely upset with what his soon to be ex-wife did to his car.

Grogg took a cabinet he gave to his soon to be ex-wife from the garage and began smashing it in the back yard, according to Grogg's friends.

The Fire Marshal's Office says that a firefighter was injured after going through one of the floors in the back room of the house. The firefighter was taken to the hospital and suffered from a severe sprain to his knee.

The fire also burned the "grass, straw or other things capable of spreading fire to lands" located behind the house, according to the complaint.

Grogg has been charged with first degree arson and causing injury to a firefighter. He is currently being held at Tygart Valley Regional Jail with bail set at $75,000.

UPDATE 9/12/19 @ 9:30 a.m.
The West Virginia Fire Marshal's office is asking for help as they investigate the recent arson in Buckhannon.

According to a press release from the West Virginia Fire Marshal's office, the incident happened on Aug. 30 in the evening at a home on 805 Spruce Fork Road. The home was damaged by the fire and is believed to be a result of arson.

Video surveillance shows two males and one female in a white van on the property when the fire started.

Anyone that has any information is urged to call the West Virginia Fire Marshal Arson Hotline at 800-233-FIRE (3473).

ORIGINAL STORY
"There's a lot more fires in West Virginia that are arson than people understand."

In August, the Buckhannon Fire Department responded to 10 separate fires, three of them are confirmed to be suspicious. One on Old Elkins Road, one on Wentz Ford Road and one on Spruce Fork Road.

Buckhannon Fire Chief, J.B. Kimble says that two of the suspicious fires are still under investigation, a cabin on Wentz Ford Road and a home on Spruce Fork Road.

"A lot of times, people break into a cabin that's remote, take what's in it and they light the building on fire to cover their tracks," said Kimble.

Kimble says that suspicious fires make up a certain percentage of the fires they respond to due to theft.

"There's a lot of theft in the remote areas like the cabins and old houses," said Kimble. "Like I said, when people do that, they don't want to leave any tracks and they'll burn the house down."

Kimble confirmed that one man is in custody after admitting to the fire on the Old Elkins Road but investigators are still looking into the other fires and what they think might have caused them.

"The cabin, there may be a few people on that one," said Kimble. "The most recent one on Spruce Fork is still under investigation. The State Fire Marshal's office and the Upshur county Sheriff's department and our department are working together to try to get a conviction on that."

Kimble urges anyone with any information on the suspicious fires to contact the Buckhannon Fire Department or the State Fire Marshal's office.

Nondiscrimination Ordinance for Star City in the works

Deputies: Man stole car in Morgantown, drove to Fairmont and set it on fire

Nondiscrimination Ordinance for Star City in the works

Deputies: Man stole car in Morgantown, drove to Fairmont and set it on fire