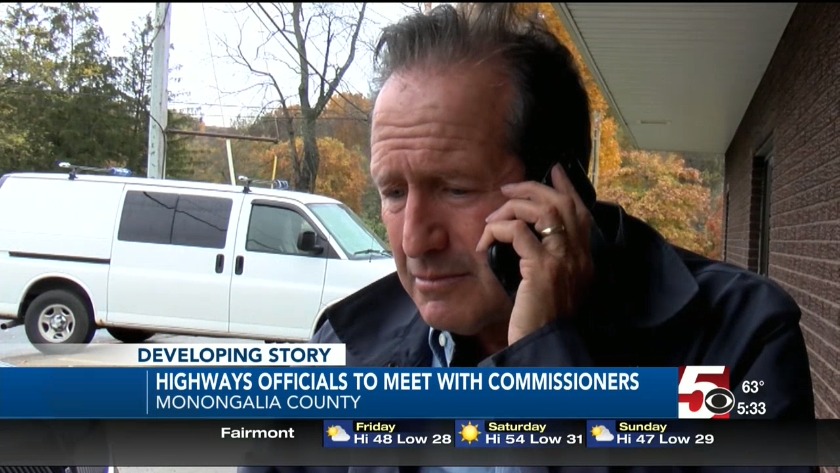 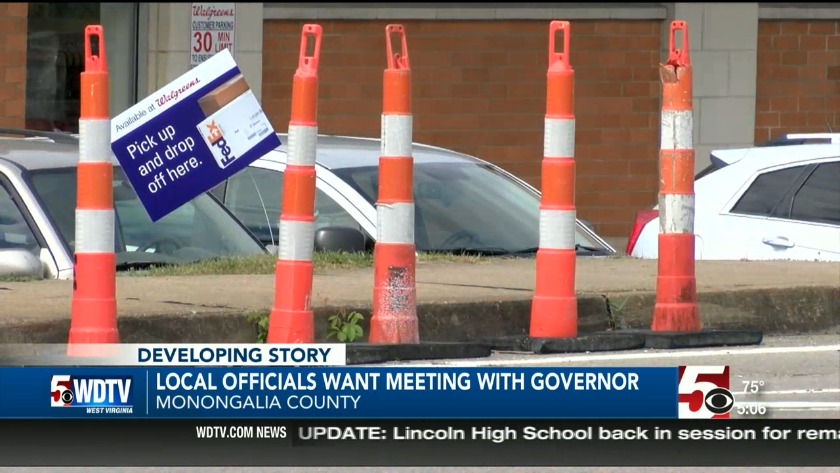 MORGANTOWN, W.Va. (WDTV) -- UPDATE 11/9/19 11 a.m.
A date has been set for a meeting Monongalia County Commissioners have been requesting for months.

Monongalia County officials want Governor Justice to come back to the area for a meeting with DOH officials to talk roads. (WDTV Photo)

Commissioners will travel to Charleston on November 22 to sit down with state transportation officials. Commission President Tom Bloom made the announcement Saturday morning.

The meeting is set for 2 p.m., Bloom said, with leaders from the Division of Highways. Commissioners have been asking for the meeting since July, Bloom has previously said, and have requested visits by state officials to Monongalia County.

UPDATE 10/31/19 6:30 p.m.
A treat was given to Monongalia County officials in the final hours of October who say, before this, all they’ve had were tricks

They’ll now get a long-awaited face-to-face meeting with top officials in the Department of Transportation.

Highways officials invited Monongalia County commissioners to Charleston to get down to business and talk about road concerns.

Commission President Tom Bloom says he’s been asking for this meeting since July.

“We do not have the open communication that we would like," Bloom said. "That's something we have to sit down and talk about.”

Bloom has previously asked to see a working list of roadwork that's separate and more accurate than the DOH's interactive map. He also wants to talk about ways they can work together with the DOH to get the roads up to par.

Commissioners want to know what’s being done to fix the roads now, but they also have concerns about the DOH's future plans.

“What is your plan for the future?" Bloom said. "How are we going to be involved to get the roads paved and the ditches cleaned?”

Those future plans include the funding formula the DOH uses to determine where resources are allocated and strategies to overcome employee shortages.

All of those questions they have for the long-term, but not just short-term.

"We want to see a plan that's not just to fix the roads until the election is over," Bloom said.

Bloom sent a letter to highways officials in early October asking for a meeting. He said he's also been trying to get Governor Justice's attention to discuss his concerns.

The governor’s office at the beginning of the month told 5 News it would be happy to schedule a meeting with the commission. A spokesperson for Governor Justice said it hadn’t received any recent requests for a meeting at that point.

Just last week, the commission teamed up with WVU President E Gordon Gee to request the DOH inspect the lights outside the Coliseum on Monongahela Boulevard.

Bloom was then told the DOH has sent out a bid to fix the lighting there.

"Until we actually see it, I won't believe it," he said.

But as for the long-awaited meeting with highways officials, Bloom said it could be scheduled in the latter half of November or early December.

"I'm very glad they reached out," Bloom said. "We're going to be very nice. It's important to work together. There's been this animosity. We need to drop the animosity and move forward."

ORIGINAL STORY 10/9/19 6:30 p.m.
Governor Jim Justice made a campaign stop in Morgantown this week and local officials want him to come back to talk business.

On his re-election campaign trail, Justice is touting his administration's investment in road projects across the street.

Monongalia County Commission President Tom Bloom says there's a lack of communication and miscommunication between local and state officials when it comes to road work.

He said he's sent multiple letters to Transportation Secretary Byrd White and the governor's office expressing a desire to schedule a sit-down meeting in Monongalia County. His most recent was sent to White on Wednesday.

In it, Bloom said he wants to know what future road work plans are and to see a running record of completed road work.

On behalf of the Monongalia County Commission, I am requesting you and your staff please come to a sit down meeting with us next month. I have asked since July 31, 2019 three questions to be answered. They are:

1) Please send us a RUNNING RECORD of what roads have been completed and what was done on each road?
2) "How do we know what needs to be done if we don't know what has been accomplished?
3) What are the future plans, after this year, on fixing our roads, cleaning our culverts?"

The Governor's office told 5 News it is willing to arrange a meeting with Bloom and DOH officials.

"As of today, the Governor’s Office hasn’t received any recent request from Monongalia County Commissioner Bloom to discuss road issues but would be happy to accommodate a meeting together with DOH officials," a spokesperson said in a written statement Wednesday.

"As for road projects that have been completed or are underway, all West Virginians can access that information every day by going to the West Virginia Department of Transportation’s website at transportation.wv.gov and viewing the interactive map of 2019 roadwork being performed across the entire state," the statement also said.

Bloom, a Democrat, says the blame he places is not on DOH District 4 officials and highways employees, but rather the leadership team in Charleston.

"We continue to try and offer solutions, but it goes on deaf ears down in Charleston," Bloom said. "Now, I have to say, it's much better and there is work being done."

But Bloom says that work isn't being done in his county that he says is being short-changed by the DOH.

"The money keeps going down to the southern part of the state," Bloom said. "My question is simple. Why are you paving a road every five years if it doesn't need it, while the ones up here do need it? Please answer that question and work with us."

At the town hall, Justice vowed to visit Preston County roads soon. He has another campaign town hall in Bridgeport scheduled for next Tuesday.